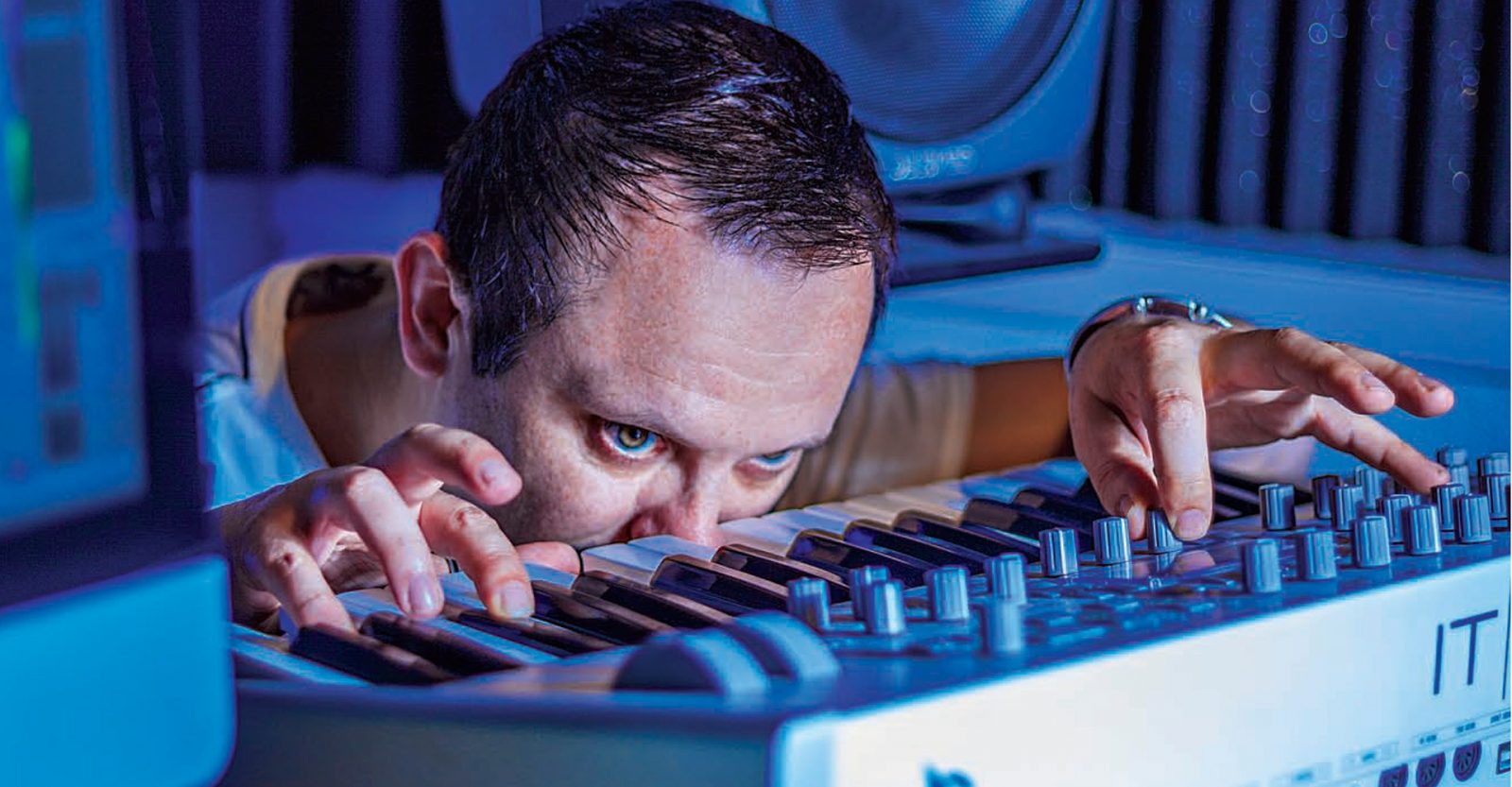 A man who’s paved the way for generations to come, a rebel with an unrelenting passion to make his statement seen and accepted by all, someone who’s dedication to our scene, has seen him successful for over 20 years, sits down with us, to tell us about the past, the present and the future, and that man is Patrick Van Kerckhoven, a.k.a. the legendary Ruffneck.

Ruffneck is a name that has been around since the beginning of the Hardcore scene here in Holland.
You are one of the founding fathers of our genre, isn’t that right?
What has been your most significant role in creating the scene we all currently enjoy?
Well first off, as you stated, when I started out there basically WASN’T a scene. We tried to make music inspired by House music hailing mainly from Chicago and Detroit. Over on the other side of the pond, myself and a few other guys started out by building our own view on things, but a scene with producers and record labels pressing their own records and all that was a very new thing. I still remember the days when I told people I wanted to make a record and make my living with that as well. I was laughed at, shunned even – people thought I was crazy off the bat. However, I pushed on and paved the way for new generations to come (of course I was not the only one at that time, let that be clear). At that time however, I was not know by the name of Ruffneck as I formed that label 4 years AFTER I started out making records under various other aliases.
My later contribution was the creation of a completely new sub-genre called ‘Artcore’, and some time later, the Darkcore sound. Furthermore, I have put a LOT of the big names that are out there right now, on the map by guiding them, and teaching them how to produce, among other things. I think that I’ve contributed quite a bit to the scene in general and am still continuing to do so, even after all these years.

The Hardcore scene has seen such a fluctuation in popularity, perseverance, and sustainability throughout your career.
In your opinion, what is it that keeps our scene afloat these days?
In my opinion, diversity and dedication is what keeps any scene alive. Throughout recent years however, in regards to diversity, certain elements in Hardcore have unfortunately received far too much attention, and it seems like people are beginning to find that ONE particular sound is what defines Hardcore. It really makes me sad to see this happen, as in my world, Hardcore is beautiful because of its various influences. Take elements from Mainstream, Old School, Industrial, Doomcore, Crossbreed, whatever you want, and fuse it together to make something unique, not just variations of the most popular artists sounds and structures. Don’t follow anyone’s lead.

Your record label, Enzyme Records, that you founded in 2001, was a massive addition to our scene.
What were your hopes at the beginning for Enzyme?
Do you feel that throughout the years, you’ve succeeded in your venture?
My hopes in the beginning were just to start fresh and give the artists who could hardly get any bookings, a solid platform to showcase themselves on. Artists like Endymion, Nosferatu and Ophidian. Organisations simply wanted ME during that time, so I pretended to leave the scene and handed it over to said guys so that the organisations had no choice but to book them. It was a big gamble and cost me a lot in terms of happiness and money, but at that time it was needed to survive in the future that would inevitably follow.
I knew it was going to be a difficult time for me as a DJ, that I would (and did) miss spinning and performing – especially when I essentially quit overnight, but I saw these artists that I was supporting as my friends, and friends are everything to me so I did what I felt I had to do to support their careers. I am fortunate to say that Ophidian is still here with me on the front line, through many years of both happiness and disappointment. I am proud of and thankful to my protégé for his loyalty. The Enzyme Records name lives on 14 years later, I am really happy to say.

You’ve recently signed an extremely talented Spanish producer and DJ called NeoX (Adrian Zapata).
What is it about this new artist that stood out to you, and what does it take for up and comers to be a part of the Enzyme Records crew?
NeoX is just a FANTASTIC guy. I think he is a very underrated and an extremely talented producer who really deserves a shot at things. Apart from that, I have had the pleasure of getting to know him on a more personal level – he is a really nice, humble guy. We have had several conversations and have shared a few sad but also very funny moments which has shown me that he is one of the few good guys left who actually CARES about his music, the scene AND more importantly, his FRIENDS, and the Enzyme cause in general. Totally professional guy who is willing to work hard and share his knowledge with the crew without an attitude. The scene needs more guys like him in my humble opinion.
To be part of Enzyme Records, I guess the first obvious thing is the fact that you need to make good music, preferably with a bit of your own unique flavour instead of simply wanting to become the next well-known artist. Being inspired by someone is a different thing, but copy-cats are a no-go. Secondly, you should be someone who respects your colleagues and someone who is willing to be part of a pretty colourful and underground team with a bit of a crazy attitude, who is happy to fight together with us to keep the true Enzyme spirit alive. That’s why our team is fairly small, we would rather have a few guys believing in their music and wanting to contribute to this cause than be consumed with people who just want to shine on the biggest stages, pretending that they care, while all they really do is lust for attention and money. That kind of attitude does NOT work in our crew and is bound to end in their departure from Enzyme sooner or later.

Who is Ruffneck these days, what are you now striving for in your career as both a performing artist and producer?
Ruffneck is a guy who has truly made a HUGE change throughout the years in both his personal attitude and his musical approach. Nowadays I still thrive on the same vision that I’ve always had when it comes to Hardcore. As a producer, I notice that I actually really like to create a LOT of different things. When I produce Mainstream, I am really happy with the result but aside from that, I am really happy when I get the chance to work on an Industrial one, followed by Crossbreed and whatever style after that. One style all day every day is frigging mind numbing and extremely boring to me, I would hate the idea of being allowed to only make one particular style …hell no! I do however, notice that I tend to like the somewhat “simpler” approach to things nowadays. By saying “simpler” I don’t mean stupid brainless Tokkiecore music, basically consisting of a kick with a childish stupid sound a baby could have punched in for 5 minutes, I mean quality, well thought out, and well-produced tunes that are easy on the ear without sounding TOO over-produced or complicated to make it appear interesting. Good examples of people who DO have the sound I like are artists like Dione, N-Vitral and Sei2ure for instance (I am a fan I admit it openly :D)
As a performing artist I’ve always strived to create a high energy atmosphere that sounds like the place is on fire and explodes with power. I don’t know exactly why, but I just want to bring that RRRRRAAAAAWWWRRRRRR (insert major bass face here) feeling (May sound weird but it’s probably the best explanation of how I feel when performing) to the party people.

Speaking of you electrifying on-stage performances, you can be seen playing various different genres.
What does Ruffneck spin these days?
Ruffneck is actually spinning all kinds of sets., depending on the party and the wishes of the organisation. I spin either straight up Hardcore or Crossbreed sets and everything in between really, but also of course Early Hardcore & Millenium sets. Recently, I can also be seen doing special request sets as D’spyre which are slower Darkcore sets, very suited for beginnings of parties to warm up the crowd and most recently even straight up Old School classic sets which is what I made before I became known as Ruffneck. Think 1990 -1993 kind of sets. The last two are of course performances that I only do on VERY special request as I want these to be done only a few times a year – very exclusive.
All in all, since I am active in ALL sorts of Hardcore, I can, and AM actually spinning various kinds of sets. The common denominator here, is that they are all based on a energetic set as that is what I strive to bring. You can make your booking inquiries through info@concreteagency.nl.

If we look at Enzyme Records’ release schedule, we see your name appear a few times over the next couple of months.
What have you been working on?
Actually quite a lot of new things hahaha. I decided that I have been helping so many people with so many projects, and that it’s now gotten to the point where it has become ridiculous. I have been working my ass off for months in the studio mixing, correcting and mastering releases and even complete albums for people without anybody actually really knowing my hand saved the project or made it playable. I took a look at what I was doing and decided that I’ve done enough in that regard. Now, I’ve decided to cut down on that craziness to make more time for myself to concentrate on my music and enjoy more ME time. I think I’ve earned that. Now I’ll have more time for producing – both solo releases and collaborations which I LOVE to do as it is so much fun when working together and I simply love to laugh in the studio while working with other people.

Can we expect an appearance from any of your aliases in the future?
I have wondered that myself. I don’t really see the point in that anymore unless…hahahaha, I won’t continue this sentence…

To watch you perform on stage is quite a remarkable thing; you scream, you jump, you fall to your knees, you dance – you still possess an admirable amount of energy.
With all of these shifts in our scene – how it came crashing down around us with the loss of vinyl, people now refusing to pay for their music, our ability to sustain our daily lives with our musical careers, etc.
All those things are more than enough to get anyone down, stop them in their tracks and force them to give up, but there you are, as if no time has passed, giving it your all.
Where do you find your passion to persevere these days?
True love for Hardcore – that’s the answer for all good things in life, just LOVE.